Hello crafty friends! This is Mayline and I am honored and excited to be returning with another guest post on the Spellbinders blog! Today I have a few projects to share with you using the Destinations Japan Collection by Lene Lok.

When I saw the collection I immediately fall in love because all the collection’s themes are Japanese traditional pattern, cloths, buildings and so on. Also, another reason is my husband is from Japan. Thus, this collection is closely related to me. That is why I was so excited to play with this Collection. 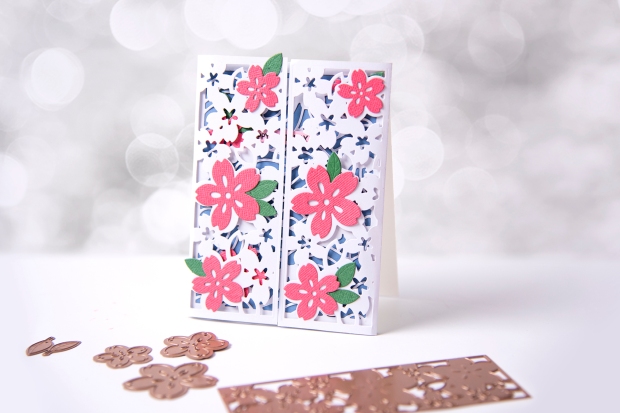 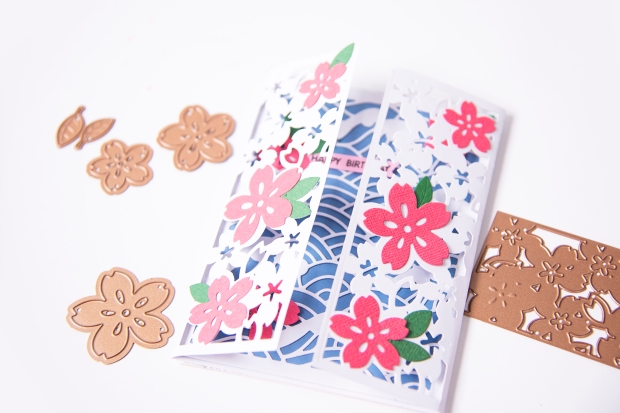 To make a double-sided open door card, you need to prepare a width 21.6cm white cardstock. I placed a Sakura blossoms inset die panel on each edge of the paper and rolled it using die machine. And then I folded each side as the picture shown above. After that, I wanted to add sakura flowers and leaves on the patterned window so I used a large, medium, and small sakura flowers and leaf die cut using pink and green cardstock. And then I adhered them to the sakura patterned window.

I wanted to make the card more fun so, I added Japanese traditional waves pattern in the inside of the card. So I used the Shapeabilities Waves Etched Dies to make the waves pattern with white cardstock. And I put blue paper behind the pattern. Also, I added flowers in the pattern because I wanted to make them look like these flowers floating in the water.  Lastly, I made a banner and stamped a sentiment “happy birthday’ 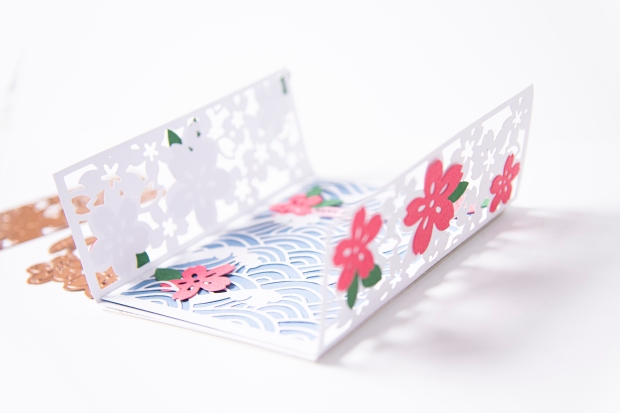 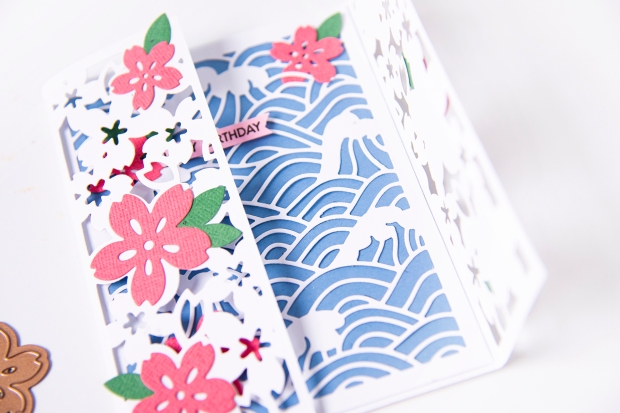 Here is another card using the same method that I used the first card. For this card, I used pink cardstocks. I like both cards whatever the card base is pink or white they turned out very pretty.

The inside of the card, instead of using waves I used Japanese traditional building (Shapeabilities Pagoda Card Etched Dies). Also, I added Sakura on the top left corner of the paper using white cardstock. I thought that this card outside is pretty enough busy due to a variety of three-dimensional patterns, so I wanted to make inside clean and simple, and less stand out against outside.

Here is next card. 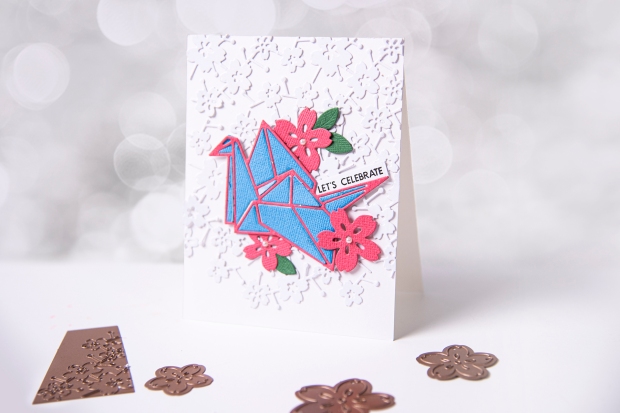 The highlight of this card is a background using the Sakura flower. These Sakura flowers are from Die D-Lites Kimono Etched Dies. This die includes the kimono with sakura blossom patterns. So I prepared an A2 sized white cardstock panel and adhered sakura blossom patterns to the panel. So the background pattern is pretty filled out with Sakura. However, it doesn’t look so busy because of using the same color ‘white’. And then I used the Die D-Lites Origami Crane Etched Dies to make the Origami Crane shapes with pink and blue cardstock. Also, I added Sakura blossoms from the Shapeabilities Sakura Blossoms Etched Dies to the around the origami crane.

The next card background was used in the same way.  I filled out the Sakura pattern entire area with the same color white. To give an accent on this card, I used Kimono.

The Kimono die includes the kimono outline and five inlay panels of the kimono so I used pattern paper for inner sections and black paper for the outline. Also, I added sakura flowers from the Shapeabilities Sakura Blossoms Etched Dies to around Kimono. I didn’t notice how busy the background of the card looks like when I was making the card. After taking the photo of this card and checking the photo I felt the card looks too busy due to background patterns. I thought that If I just add Kimono only and remove pink sakura, it looks way better and can be focused on Kimono more. But this layout/look is not too bad. I still love it! I hope you like too.

Here is my last card for today. I used Shapeabilities Zen Garden Welcome Etched Dies. It’s a traditional window in Asia (not only represent Japanese window but also Korean and Chinese traditional window) So you can use this die set any east Asia concept theme card. And you can use it some special occasion cards such as Chinese/Korean new year (Lunar Calendar) or Korean thanksgiving day (called “Chuseok”) or use it for someone who graduates some Asian culture class or school.

I prepared an A2 sized cardstock panel for the card base and prepared another 7.5cm cardstock for making the window. And set aside. Next, I cut the wave pattern with purple paper and adhered it to the card base and then I make it fit the inside of the window. So unnecessary part I cut. And after,  I adhered the window to the panel. Next, I added Sakura (black – I wanted to make it shadow looking) to the panel. Next, I cut all the lantern parts and assemble them. And you can make 3D lanterns. I tapped them to panel. Lastly, I added a banner with white stamped sentiment ‘congregations’ to the card.

I hope you enjoyed my today’s projects. Thank you for stopping by!

If you want to see more spellbinders projects click the image below or find categories and select spellbinders as the image shown below. Happy crafting! 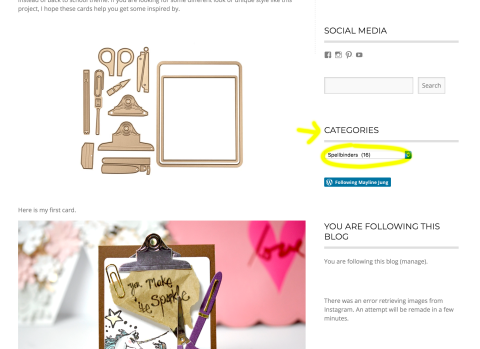 One thought on “Destination Japan by Lene Lok – Spellbinders”

This site uses Akismet to reduce spam. Learn how your comment data is processed.